A MESSAGE FROM PHIL

As we celebrate 30 years of winemaking here in the Temecula Valley, we thought it would be appropriate to revive our monthly newsletter in the form of a blog, and share some remembrances of those years.  In the next few months we will talk about the people who established this wine region and the people who helped and influenced us.  We will also talk about the events that shaped our region’s development, the changes in wine making and viticulture practices, and our own development as wine makers and restaurateurs.

This month I want to salute John Moramarco who was recently inducted into the Temecula Valley Winegrowers Hall of Fame and who, sadly, passed away not long after.

John was Vineyard Manager and Senior Vice-President at Callaway Vineyard & Winery when we moved to Temecula in 1981, and we asked him if he would be a paid consultant to us regarding planting our first acre of grapes.  He said he would be happy to help us, but not if we insisted on paying him.

So we spent a few hours with him, driving around the vineyards, learning which grapes did well, about the soils, trellising, planting procedures, and so on.  Over the years, we got to know him better and better, and our esteem for him grew and grew.

Having grown up in a family grape growing business in Cucamonga in the 1930s and being a part of that business in the 40s 50s, and 60s, John had seen thousands of acres of vineyards succumb to the pressures of housing development, and he was determined that this wouldn’t happen in  Temecula.  When Temecula was incorporated in 1989 the city limits ended just at the entrance to wine country. The city put us in their “Sphere of Influence” which is a necessary first step to future annexation. Even though we had confidence that the City wanted to preserve wine country and not turn it into housing, John was vehemently opposed to annexation, rightly asserting that the tax structure of municipalities was inhospitable to agriculture, and that we should stay with the more compatible rules of the County.   So the city took the unprecedented step of removing us from its sphere. 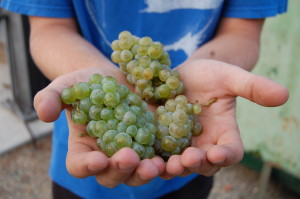 At about the same time, Riverside County was updating its zoning and forming citizen committees from various areas to help draft regulations.  Supervisor Kay Ceniceros appointed John to head up the wine country sub-committee, and John asked me to be a part of it.  His obvious passion made him a strong leader and he was able to bring disparate interests (Homeowners, winery owners, grape growers, citrus growers, real estate agents, livestock breeders, et. al) to a common understanding.

The result was the CV (Citrus Vineyard) zone, unique at the time because it allowed smaller parcels, encouraged the development of small wineries selling their products from their vineyards and allowed for other compatible commercial uses as long as 75% of the land was in agriculture.  This framework developed in the late eighties is still in operation after almost thirty years, and it was John’s influence, foresight and leadership that made it happen.  40 wineries, three world class hotels, myriad restaurants and a Marriott resort in the works attest to its success.

The Early Days of Baily Winery
September 8, 2016
Go to Top